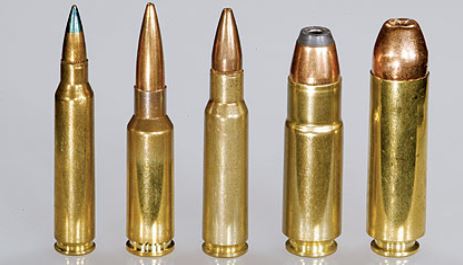 The AR-15 has long-been established as America's most popular civilian rifle. With near endless customization possibilities and caliber options, it's easy to get overwhelmed by so many choices. What is really important is that we know what to expect from our rifle. What are you going to do with it? The most popular uses for an AR-15 are competition, hunting, precision, sporting, and varmint; any of which could make use of a variety of caliber options. Do you ever wonder what the differences between rifle cartridges really equate to?

Competition rifles are usually built for speed and accuracy.  3-gun shoots have exploded in popularity, and demand versatility of the shooter and his or her rifle.  A wide variety of targets, shooting positions, and engagement ranges will test a competitor's speed and accuracy in very different ways. While there is a wide range of what works and a general attitude of “run what ya brung” in this community, a lightweight and low-recoil setup that is accurate at variable ranges may be best.  Typically, shooters in this category use a .223 caliber setup for it's low ammunition cost and excellent accuracy.

Weight, energy, effective range, and accuracy are very important in a hunting rifle. I will probably be carrying the rifle on my person while I hunt, so I want my rifle to be accurate and light so that I can make the shot count, when it counts. Some states have a minimum energy requirement you may need to meet.  Personally, I want 5 ft. or less drop at 500 yards with a muzzle energy below 1500 ft/lbs. for better control. I want to deliver to my quarry a minimum amount of energy in ft/lbs. equal to its weight in lbs... So for a 400 lb. Animal, I want a minimum of 400 ft/lbs. at target.  Down range energy is an important factor in determining maximum effective range. Another factor is bullet construction vs. velocity. Hunting bullets are designed to expand at controlled velocities. So it is important that we know the performance range of our bullets and the velocities that our rifle produces. My favorite hunting bullet in .30 cal requires an impact velocity of 2200 fps or faster to work as designed. I make sure that my target is close enough that I will still achieve that velocity.

Precision rifles are built for shooting tight groups on paper. They tend to be big, heavy, and shot from a bench rest. They favor fast cartridges or heavy bullets, depending on what you intend to do. A precision rifle for shooting at 100 - 300 yards will favor lighter, flat based bullets at higher velocities. While a precision rifle built for long range shooting would more likely favor heavy boat tail bullets that are not as fast. Typically these rifles would run the 204 Ruger or .223 Remington.

Varmint is its own class of precision rifle meant to shoot small critters from reasonable distances. A varmint rifle is typically heavy with a longer than standard barrel that will be chambered in one of the faster cartridge choices.  Similar to a precision target rifle, this setup will usually be chambered in .204, .223, or similar cartridge.

Sport rifles are your run of the mill, let's go shoot type guns. They are good all around guns that tend to be on the lighter side. This type of rifle will run in a competition and hit reasonable sized targets at a reasonable distance. Basically, its built for plinking and ease of use and carry. The most popular caliber for this purpose remains the .223/5.56, however the 7.62x39 AR is being used more and more by plinkers due to it's low ammunition cost and increased energy on target for additional fun-factor.

Have a look at the tables and notes below to gain some perspective. Keep in mind that the data presented is an estimation based on common conditions in Colorado and depends on many factors.

The bullet weight/type is the load. When you buy a box of ammo it will have a weight (wt.) in grains (gr.) and bullet type like full metal jacket (fmj) or hollow point boat tail (hpbt). These are just what I used for the table, and I did not get into brand specifics. The zero is where the bullet impacts exactly on sight. I used 100 yards as a control for bullet drop and wind comparison. Muzzle velocity is how fast the bullet exits the barrel and is measured in feet per second(fps). We use this to see how fast the bullet slows down. Muzzle Energy is a reference for recoil and will be used to see how fast the bullet sheds energy. The energy is given in foot pounds (ft/lbs). The wind effect at 400 - 500 yards @ 10 mph is how many inches the wind pushes the bullet if the wind is 10 mph and directly perpendicular to the direction of the bullet. Drop @ 400 - 500 yards tells us how far the bullet falls in inches, or how high you have to hold over your target to hit. Velocity @ 400 -500 yards lets us know how much velocity we have remaining, as with energy remaining @ 400 - 500 yards.

I mentioned recoil, but there is no recoil energy listed in the tables. To help us rate the recoil of a cartridge, we look at the muzzle energy. More energy means more recoil. It is the nature of physics. Luckily, recoil can be tamed with a number of muzzle devices on the market today. A muzzle break can reduce recoil up to 70%. and makes your report louder at the shooter.  A suppressor will reduce recoil and quiet your report while adding weight and length to the rifle. Just know that you will not eliminate recoil completely.

With what we expect in mind, lets look at some data.

Currently the fastest production cartridge on the market. Purpose built as a varmint cartridge with explosive energy and a flat trajectory. With an amazingly low recoil signature, you will be shooting this rifle accurately all day long. The only drawback is that the ammo can be expensive and hard to find relative to some of the other cartridges available in the AR-15 platform. As you would expect, these rifles tend to be extremely accurate.

A favorite of varmint and target shooters. The general consensus is that the 223 Rem. is a more accurate chambering than the 5.56x45. Most 223 Rem. have a twist rate of 1:14-1:10 to better stabilize the lighter than 55gr bullets. Therefore, most of your ammo is 55gr or less. The ammo is affordable and can be found just about anywhere ammo is sold. The reason that the 223 Rem. has become less popular in the AR platform is that the 5.56x45 NATO cartridge has the same external dimensions as the 223 Rem. and will chamber and fire in a 223 Rem. So what's the difference? Pressure! The 223 Rem. has a maximum safe operating pressure of 55,000 psi. While the 5.56x45 NATO has a maximum safe operating pressure of 62,350 psi. That may not seem like much, but it's an 11.8% increase in pressure. DO NOT FIRE 5.56x45 in a 223 Rem.

A note on the 223 Wylde Chamber

Designed to get the most accuracy out of a 5.56x45 safe chamber. This has become a very popular choice for anyone who wants the potential accuracy of a 223 Rem. with the versatility of a 5.56x45.

This is the American military rifle chamber. Typically comes with a 1:7-1:9 twist to better stabilize bullets in the heavier than 55gr variety. This is the most common AR-15 chamber. Ammo is readily available and affordable, making it a great choice for training,plinking, or competitive shooting. Keep in mind that you can safely shoot 223 Remington, so ammo is everywhere.

Purpose built for accurate, long range hitting power from the AR-15 Platform. This is a popular and in demand little cartridge. At 800 yards, the drop is around 200 inches with a little over 500 ft/lbs of energy. The 5.56x45 62gr drops around 165 inches at 800 yards, but has less than 300 ft/lbs of energy. The drawback is cost per shot. Being purpose built for distance shooting, most ammo manufactures use premium bullets to make high quality ammo.  Even the more affordable FMJ ammo is of high quality, so there is no reason not to shoot well.

To over simplify, this is an American answer to the 7.62x39 Russian. It has energy equivalent to the 7.62x39 Russian, but faster and flatter for more distance. This cartridge will match the energy of the 7.62 to 500 yards, but with 2ft less drop. Due to the superior bullet construction, this is a better choice for hunting, target, and most competitive shooting. But as you would expect, the cost per shot is also higher.

Not to be confused with the 300 whisper, this is a purpose built cartridge for a suppressor. There are two faces to this cartridge. The supersonic side will push the lighter than 150gr bullets at over 2000 fps making it a great choice for hunting or fast action shooting. While the sub-sonic side can deliver a greater than 200gr bullet to 300 yards with 400+ ft/lbs of energy (that's 45acp energy). If you want quiet, this is probably the most quiet suppressed center fire rifle round when using sub-sonic ammo. It's no surprise that hunters have taken to this cartridge for its ability to put down medium sized game quickly, with fast follow up shots if necessary.

The Russian designed equivalent to the American 30-30 WCF, but with a spitzer bullet and made more compact for automatic rifles. There are more powerful battle rifle cartridges, but this seems to be the standard by which all the others get judged. Many consider it to be the best compromise between recoil and power. It has a reputation for putting targets down quickly, although recoil is more significant than the faster, flatter 5.56x45 NATO. Ammo is on the cheaper side and readily available making this an excellent all around choice.

Built for power, this is a hard hitter. If energy is your goal, this is your choice. A favorite of big game hunters, this will put down anything in North America. The down side to all that energy is recoil. It's painful and even with a  muzzle device the recoil will cause significant muzzle rise, so faster shots can be challenging. It is still a lot faster than a bolt gun, probably even a lever gun.

Because bigger is better, and this is the biggest. This shoots a massive half inch diameter round or flat nose bullet to deliver high amounts of energy and deep penetration. Great for hunting larger and more dangerous game at close distance. The heavy bullet drops fast so long distance shots can be difficult.

This cartridge was inspired by special ops guys who wanted more stopping power, whether or not the weapon is suppressed. Using sub sonic rounds, this little cartridge can deliver a 600gr projectile with authority, and not much bark. With the supersonic loadings you get tremendous energy and effect on target. A favorite of medium and big game hunters, this cartridge stands out from the 450 Bushmaster and 50 Beowulf due to its bottleneck case design.

Again, the data above is an estimation based on common conditions in the state of Colorado. Many factors play a part in how bullets perform. Although the data is accurate, it is for reference only.

In parting, I would like to reiterate that firearms are purpose built, to serve a need. Get the right tool for the job. Many universal tools work very well, but having the right purpose built tool often makes the job easier. Thank you for taking the time to visit us. Our goal is to bring you the information you need to make an informed and educated decision. Have suggestions or questions? Please, let us know.

"There are no bad guns, only better ones."